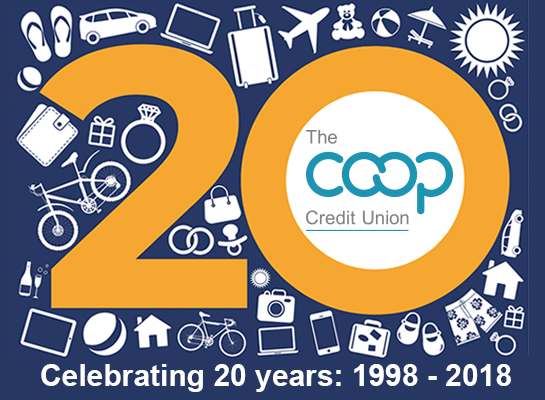 Today marks the 20th anniversary of The Co-op Credit Union, and 20 years on, with the prospect of millions of borrowers being hit by increased interest rates, credit unions have never been more relevant.

That was the message from Andrew Davey, Operations Manager of The Co-op Credit Union, as it reaches this significant anniversary.

The Co-operative Family Credit Union, as it was then called, was formally launched on 1st October 1998 and has been providing it members with easy savings and loans operations ever since.

Andrew said: “It is clear that interest rates are about to rise from the historically low base we have grown accustomed to in recent years. Like millions of others, our members will be impacted by these forecasted rate rises as around a quarter of our members have a household income of less than £20K per annum.

“As it was 20 years ago when the Credit Union was established, our aim remains to provide members with a simple mechanism for saving and borrowing such as providing loans from £50.00 to £15,000 to help spread the cost of Christmas

“I am extremely proud that from a relatively modest beginning the credit union has grown into a thriving operation, serving the needs of more than 8,500 members drawn from a range of co-operative organisations across the UK.”

The Co-op Credit Union now has seven permanent staff members and around 25 members who undertake tasks for the credit union in a voluntary capacity, such as board directors. It manages over £5m of members’ savings, and loans of £2.5m.

This entry was written by Credit Union, posted on October 1, 2018 at 11:08 am, filed under Latest News, Member News. Bookmark the permalink. Follow any comments here with the RSS feed for this post. Both comments and trackbacks are currently closed.